Glenn Skuthorpe is joined by keyboardist, Lainie Jamieson. With six highly-regarded albums and music featured in movies and documentaries such as The Emu Runner and John Pilger’s Utopia, Nhunggabarra, Kooma man and international touring singer-songwriter Glenn Skuthorpe is a powerful lyricist and composer who gives voice to those whose stories must be heard. A compelling performer whose playing style is captivating, engaging audiences in the stories behind his journeys. Glenn has performed on stages big and small with some living legends in his long career including Buffy Sainte-Marie, Steve Earle, Tex Perkins, Kev Carmody, Archie Roach, Rory McLeod, Michelle Shocked, Buddy Miller and Mary Gauthier. With his seventh album on the way and a string of highly successful tours (Port Fairy Folk Fest, Adelaide Fringe, Byron Bay Blues Fest, Woodford, Broome Saltwater Festival, Cygnet, Calgary and Edmonton Folk Festivals) prepare for an infusion of genres with vibes of urban street blues to open plains and wide open skies. 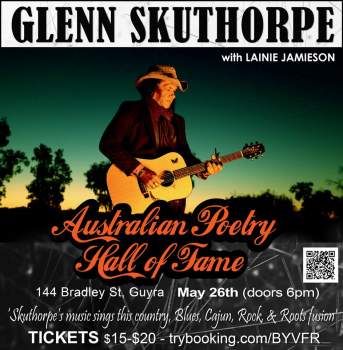 The 5th Guyra TroutFest will be held October 7, 8 & 9. This year they are adding 2 days of markets and a car boot sale. Come and see the fish flies display made by local fishers. Get a laugh from fishy jokes at the poet's breakfast. Vote on the art amongst the vintage cars and its special cate...  read more

This website was created by the Guyra & District Chamber of Commerce to promote business and tourism operators in and around Guyra.
Read more About Us

Help support the Guyra District and become a member today. You will get a business listing on this website and many other benefits.
Read more on Becoming a Member